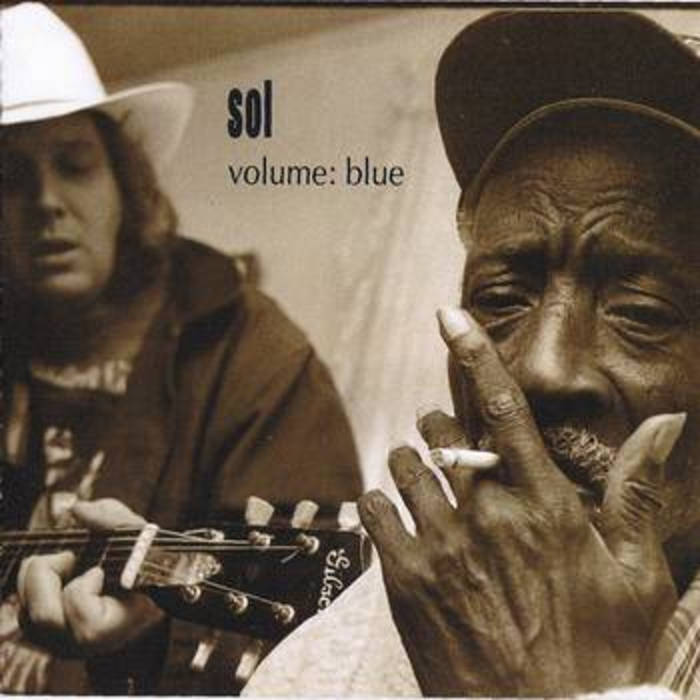 The CD release Volume: Blue is recognized as an underground classic, combining blues, hip-hop, and experimental music styles. Volume: Blue is Sol’s tribute to his blues and roots mentors and received international attention to carry Sol overseas to perform these sets live.
Sol has performed with the pioneers of roots, blues, and r&b and traveled the world performing with these masters. Volume: Blue was released in 2003 under the Music Maker Recordings label.

ALBUM REVIEW by Peter Cooper:
“While many young, white musicians attempt to replicate the blues masters’ art, Sol steers clear of imitation in favor of excavation and transport. Sounds carry beyond genre, beyond origin and often beyond the grave. Ancient truths of the blues arrive in some new place, through some new voice, through some kid who is Sol.

Who is Sol? Some kid, I guess. Then again, anybody would look like a kid if they were pictured sitting at a little table, next to a beer-drinking, truth-telling Cootie Stark and a sunglass-wearing, cool-staring guitar slinger like John Ferguson. That’s the only glimpse we get of Sol, and we don’t get that one until we pop open the Volume: Blue CD and remove the disc from its jewel box. Then you see a shot of Sol with Ferguson, Cootie and a Heineken, and that’s probably worth the price of purchase right there.

Once the disc is out of its casing, it might as well go into your CD player. Then Sol reveals himself through grooves and samples and even some guitar and bass playing. He’s some kid with good ears; some loopy kid with uncommon understanding; some oddly driven kid who has learned lessons that would seem beyond his years.

For Cootie, Guitar Gabriel, Cool John Ferguson, Neal Pattman, Essie Mae Brooks, Frank Edwards and others, Sol is a microphone and a conduit. Sol channels blues, altering soundscapes without altering intent. Captain Luke might say a Sol construction is “not my type of song,” and Captain Luke (as usual) would be right. But Luke’s messages aren’t lost in Sol’s funky, postmodern shuffle. While many young, white musicians attempt to replicate the blues masters’ art, Sol steers clear of imitation in favor of excavation and transport. Sounds carry beyond genre, beyond origin and often beyond the grave. Ancient truths of the blues arrive in some new place, through some new voice, through some kid who is Sol.” -Peter Cooper, Nashville, TN

"There are not many albums that I would dare describe as truly unique, original recordings, but I take that stand with "Sol: Volume Blue." This album delves both into the history of the blues, and into its future. By spicing these seminal, bluesy recordings with elements of world beat, electronic, and other ethnic music forms, Sol ensures that the future of the Blues is rich. Such tracks may be "off the blues" in their truest sense, as Captain Luke or Guitar Gabriel might put it, but by imbuing these recordings with added layers, Sol has given us a truly momentous recording. Although some may have noticed this in 2002/2003, hopefully more will notice that today. This truly is a fantastic, one-of-a-kind album." - J Evan Wade, Home Grown Music Network